In M210 V2, a new feature, Time Synchronization, is introduced, it offers developers the ability to accurately synchronize external sensing and compute with the GPS/RTK time, the flight controller clock, and the exposure time of the stereo cameras.

Time sync provides developers with a periodic pulse at the tail of the drone along with several software packets. These packets include FC and UTC time stamps, time-aligned IMU data and GPS/RTK NMEA messages.

The goal of time sync is to provide a common and low-drift time reference to accurately synchronize the captured time of the data inside the drone with the clock of external sensors or compute.

An example use case - developers can accurately trigger the sensors onboard DJI aircraft and fuse them with the time-aligned data inside the drone such as IMU and images. All these data can be time-stamped on UTC time reference for inspection and documentary purposes.

The central principal of operation for time sync can be followed in this diagram: 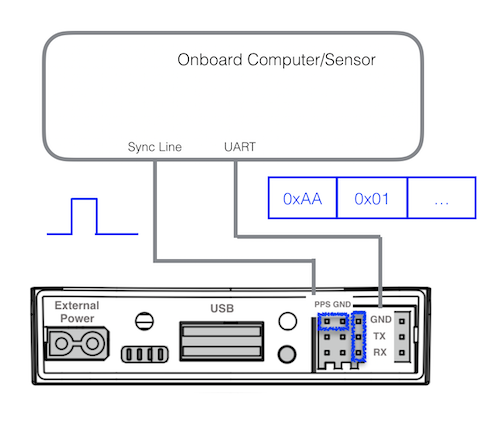 To access these time-aligned data, two sets of APIs are provided, callbacks and message polling, for developers to subscribe to the data or to check the availability and obtain a copy of the data.

Through these APIs, developers have two ways to access these data