The flight controller is an onboard computer that combines control information from the pilot with sensor information to adjust the thrust at each propellor and fly the aircraft as desired.

The flight controller is responsible for:

A general description of fundamental flight control concepts can be found here.

The flight controller provides detailed real-time state information at up to 200 Hz including:

Motors can be turned on and off through APIs in the DJI Onboard SDK. Motors can only be turned off when the aircraft is not flying. Motors will not turn on if there are IMU or Compass calibration errors, or if the IMU is still pre-heating.

Aircraft take-off and landing can be automated through APIs in the DJI Onboard SDK. Takeoff is considered complete when the aircraft is hovering 1.2 meters (4 feet) above the ground. Automatic take-off can only be initiated when the motors are off.

When a automated land command is sent, the aircraft will descend at it's current position and land.

Aircraft flight can be controlled in several ways:

The remote controller control sticks can be used to move the aircraft forward, backwards, left and right. However, if the direction of the aircraft isn't obvious, it can be difficult to control the aircraft predictably from pilot's perspective on the ground.

The GEO system is a best-in-class geospatial information system that provides drone operators with information that will help them make smart decisions about where and when to fly. It combines up-to-date airspace information, a warning and flight-restriction system, a mechanism for unlocking (self-authorizing) drone flights in locations where flight is permitted under certain conditions, and a minimally-invasive accountability mechanism for these decisions.

The Flight controller manages several sub components of the aircraft including sensors and landing gear.

The compass measures magnetic field direction and is used to determine the heading of the aircraft relative to North. The compass must be calibrated first time you turn on an aircraft as well as periodically if flying near magnetic interference.

Compass calibration can be done manually or programmatically:

The IMU contains an accelerometer and gyroscope to measure linear acceleration and angular velocity. The IMU is a sensitive system that is dependent on temperature and sometimes requires recalibration. Preheating is done automatically by the aircraft, and its status can be monitored in the flight controller state data. Calibration can be initiated by Assistant Software when required.

Some products have more than one IMU for redundancy. The Phantom 4 has two IMUs, while the M600 can accommodate up to three.

The DJI DRTK positioning system is an accessory compatible with the M600 and A3 flight controller that allows centimeter level positioning. DRTK is a real time kinetic satellite positioning system that uses GPS+GLONASS or GPS+Beidou constellations (depending on DRTK model).

The mobile station comes with two antennas which can be deployed on opposite sides of the aircraft. As the position of both antennas can be combined into a heading vector that can often be more accurate than compass heading in the environments with high magnetic field interference (like near large metal structures, or high voltage lines).

Cameras can be used to detect obstacles and accurately determine relative position and velocity. These cameras are typically mounted on the product facing downward for positioning and forward for obstacle detection. They are separate from the main camera used to capture photos and videos.

The vision system enables users to fly with increased comfort as there is lower probability they will make a mistake and impact an object. However, limitations of the system still need to be understood to fly safely. Objects that are difficult to detect are those that are small, very narrow, too plain in appearance (visual features can't be extracted), not in the field of view of both cameras, or too close or too far from the product (see product page ) for specifications).

Downward facing cameras can help determine relative position and velocity more accurately than consumer satellite positioning systems. They can also be used to hover in GPS denied environments such as inside buildings.

The DJI Onboard SDK provides Telemetry assistance that provides access to state information of the aircraft and its sensors.

Some products have moveable landing gear that are deployed when landing to protect the camera, but can be raised (retracted) when flying to not impede the camera view.

In transport mode, the landing gear will be in the same geometric plane as the aircraft body so it can be easily transported.

During a flight, the flight controller and smart battery will work together to estimate the remaining time of the current flight based on data collected during the flight. It will also provide estimates for the the battery percentage required to return home from the current location, or land immediately.

In addition, two manual battery thresholds can be set in DJI Assistant 2 that will automate aircraft behavior when the battery is running low.

Before returning home, the aircraft must record a position(include latitude and longitude) as home location. Setters like Aircraft, SDK, RC, APP have the authority to set the home location. The conditions of setting home location by aircraft and SDK are as follows: 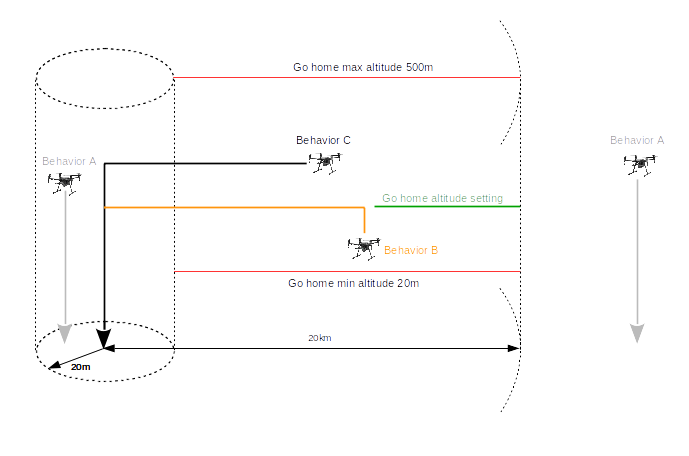 According to different aircraft altitude and distance to home location, there are three kinds of return home behavior.

At the combination of aircraft altitude and distance to home location, the behavior is as follows:

There are two kinds of landing named auto-landing and forced landing.

The aircraft can automatically return-to-home (RTH) in a number of scenarios:

Press the Return Home button on the remote controller to initiate Smart RTH. The aircraft will then automatically return to the last recorded Home Point.

The remote controller's control sticks can be used to change the aircraft's position to avoid a collision during the Smart RTH process. Press and hold the button once to start the process, and press the button again to terminate the procedure and regain full control of the aircraft.

Smart RTH can also be initiated and canceled through the DJI Mobile SDK.

In some missions, it is not desirable to immediately return home when signal connection is lost. Failsafe behavior can be configured using DJI Assistant 2.

When the battery drops below a certain threshold (typically 25% to 50%), the aircraft will not initiate a mission or a single flight. At the same time the remote controller will start beeping.

The RTH procedure can be cancelled by either pressing the home button on the remote controller, or sending a cancel command through the application using the SDK.

The wireless connection between the remote controller and aircraft can sometimes be lost when the distance is too great, or obstacles impede the link.

If the link is lost for 3 seconds, the aircraft will start performing a failsafe behavior. Behavior options include:

Yaw can be changed by either angle or velocity. Yaw settings are independent of the coordinate system. Positive yaw velocity will always rotate clockwise, and yaw angle is always relative to North.

Vertical movement can be achieved either using velocity or position. Position is an altitude relative to the take-off location. Velocity is always relative to the aircraft, and does not follow typical coordinate system convention (positive vertical velocity results in the aircraft ascending).