The DJI Mobile SDK is a software development kit designed to give developers access to the capability of DJI's aircraft and handheld camera products. The SDK simplifies the application development process by taking care of lower level functionality such as flight stabilization, battery management, signal transmission and communication. This way, the developer does not require a background in robotics or embedded systems and can instead focus on the application the DJI product is being integrated into.

This introduction will describe how the SDK connects to the products, what functionality the SDK provides, and an introductory architecture of the SDK.

Many of DJI's product features and capabilities are accessible to developers through the SDK. Developers can automate flight, control the camera and gimbal, receive real time video and sensor data, download saved media from the product, and monitor state of the other components.

Camera and gimbal functionality is highly programmable and allows:

The live video broadcast by the aircraft of the main camera feed is available through the DJI Mobile SDK. Live video is available even when the camera is capturing images or video to it's storage media.

Rich sensor data is available through the SDK. GPS position, compass, barometer, flight velocity and altitude are some of the sensor readings available at up to 10 Hz through the Mobile SDK.

Videos saved to the camera's storage media (SD card or solid state drive) is accessible to view and download through the DJI Mobile SDK. Both previews and full image data can be accessed.

The remote controller, battery and wireless link can all be accessed through the SDK. Mostly these components provide state information, but some control is also possible.

Differences with Other SDKs

Most iOS and Android applications will either create, manipulate and/or visualize data. However applications using DJI's Mobile SDK can be fundamentally different as they can interact with the world around the user.

It is not possible as a developer to predict or programmatically assess the environment a user will operate in. An easy maneuver in an open environment, can be difficult in a confined space. Environments can be dynamic and might be sometimes safe, and other times not. Therefore it is important that both developers and users understand the capabilities and limitations of the products and their controlling applications.

Connection to Application and Product

The following diagram illustrates how the DJI Mobile SDK fits into a mobile application, and how it is connected to a DJI aircraft. 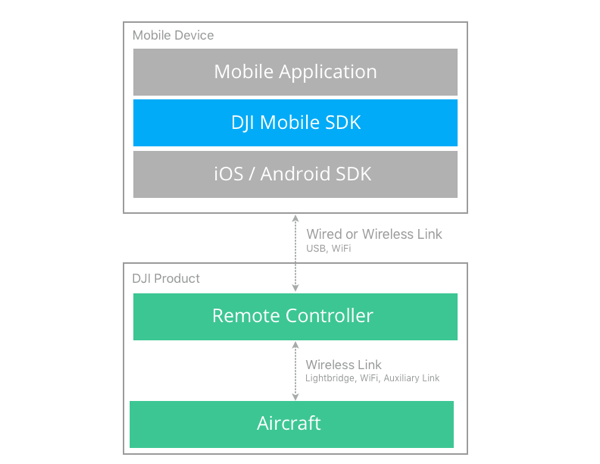 For a handheld camera product, the Remote Controller is replaced with a Handheld Controller and there is no aircraft or additional wireless link.

A mobile application is built with the DJI Mobile SDK, the platform SDK (iOS or Android) and is run on the Mobile Device (Apple iPhone, iPad, Nexus phone, Nexus tablet etc).

The mobile device connects to a DJI product either wirelessly with WiFi or through a USB cable depending on the product. For aircraft products, the mobile device connects to the remote controller, which connects wirelessly to the aircraft through another wireless link (for the Phantom 3 Standard, two wireless links connect the remote controller and aircraft). Detailed connectivity for each product is shown below.

Therefore, depending on the product, when a command is sent from the DJI Mobile SDK to an aircraft, the command might pass through several wireless links and cable connections.