This tutorial is designed for you to gain a basic understanding of the DJI Mobile SDK. It will implement the FPV view and two basic camera functionalities: Take Photo and Record video.

Importing and Activating the SDK

Now, let's create a new project in Xcode, choose Single View Application template for your project and press "Next", then enter "FPVDemo" in the Product Name field and keep the other default settings.

Now, let's install the DJISDK.framework in the Xcode project using Cocoapods and implement the SDK activation process in the "DJICameraViewController.m" file. If you are not familiar with the process of installing and activating DJI SDK, please check the Github source code and this tutorial: Importing and Activating DJI SDK in Xcode Project for details.

DJIWidget is available through CocoaPods. To install it, simply add the following line to your Podfile:

Note: Remember to add use_frameworks! in the pod file to use DJIWidget as a dynamic framework in Swift project.

1. Let's open the FPVDemo.xcworkspace file in Xcode and open the Main.storyboard, add a new View Controller and set DJICameraViewController as the Class for it:

Go to "DJICameraViewController.m" file and import the DJISDK and DJIVideoPreviewer header files. Next implement four delegate protocols and set the IBOutlets and IBActions for the UI we just create in Main.storyboard as shown below:

In the setupVideoPreviewer method, we set the fpvPreviewView instance variable as the superview of the MovieGLView in the DJIVideoPreviewer class to show the Video Stream first, then create a DJIBaseProduct object from the DJISDKManager and use an if statement to check its model property.

3. Once you finished the above steps, let's implement the DJISDKManagerDelegate delegate methods and the viewWillDisappear method as shown below:

4. Lastly, let's implement the "DJIVideoFeedListener" and "DJICameraDelegate" delegate methods, as shown below:

Here, we use the -(void)videoFeed:(DJIVideoFeed *)videoFeed didUpdateVideoData:(NSData *)videoData method to get the live H264 video feed data and send them to the DJIVideoPreviewer to decode.

Moreover, the -(void) camera:(DJICamera*)camera didUpdateSystemState:(DJICameraSystemState*)systemState method is used to get the camera state from the camera on your aircraft. It will be invoked frequently, so you can update your user interface or camera settings accordingly here.

Connecting to the Aircraft or Handheld Device

Please check this Connect Mobile Device and Run Application guide to run the application and view the live video stream from your DJI product's camera based on what we've finished of the application so far!

If you can see the live video stream in the application, congratulations! Let's move forward. 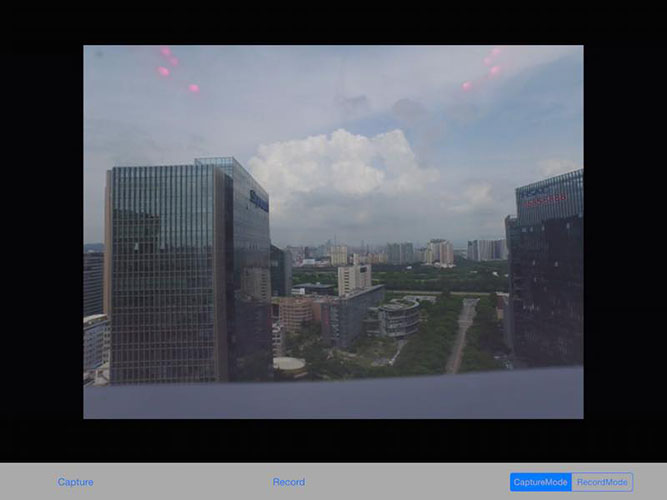 Let's implement the captureAction IBAction method as shown below:

In the code above, we firstly invoke the following method of DJICamera to set the shoot photo mode to DJICameraShootPhotoModeSingle:

You can check the shoot photo result from the DJICompletionBlock.

Build and run your project and then try the shoot photo function. If the screen flash after your press the Capture button, your capture fuction should work now.

Before we implement the record function, we need to switch the camera work mode firstly.

You can see from above that there are 5 types of DJICameraMode. Here we use the first two types.

Remember we create a UISegment Control in the storyboard? We can update the state of the segmented control when switching between DJICameraModeShootPhoto and DJICameraModeRecordVideo using the previous delegate method like this:

Now we can implement the changeWorkModeAction IBAction method as follows:

In the code above, we invoke the - (void)setMode:(DJICameraMode)mode withCompletion:(DJICompletionBlock)completion; method of DJICamera to change the camera mode. Here we add two UIAlertViews to show warnings when the user set DJICameraMode failed.

2. Working on the Record Action

Firstly, let's go to Main.storyboard and drag a UILabel on top of the screen, set up the Autolayout constraints for it and create an IBOutlet named currentRecordTimeLabel in the DJICameraViewController.m file.

Then add a BOOL variable isRecording in the class extension part of DJICameraViewController. Be sure to hide the currentRecordTimeLabel in the viewDidLoad method.

We can update the bool value for isRecording and currentRecordTimeLabel's text value in the following delegate method:

Because the text value of currentRecordingTime is counted in seconds, so we need to convert it to "mm:ss" format like this:

Next, add the following codes to the recordAction IBAction method as follows:

Now, let's build and run the project and check the functions. You can try to play with the Record and Switch Camera WorkMode functions, if everything goes well, you should see the screenshot like this: 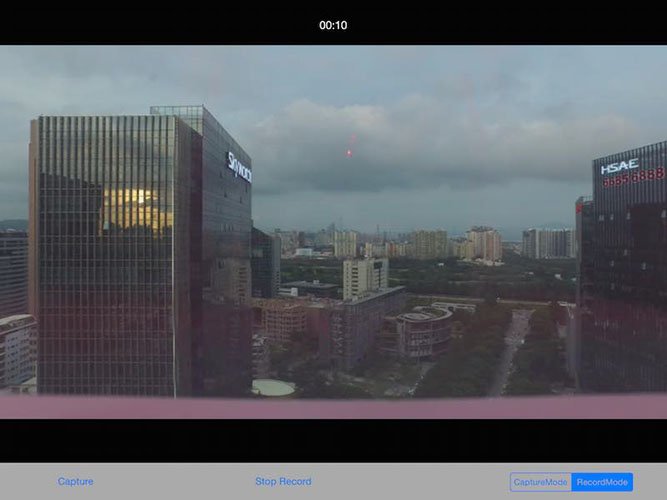 Congratulations! Your Aerial FPV iOS app is complete, you can now use this app to control the camera of your Mavic Pro.

In this tutorial, you’ve learned how to use DJI Mobile SDK to show the FPV View from the aircraft's camera and control the camera of DJI's Aircraft to shoot photo and record video. These are the most basic and common features in a typical drone mobile app: Capture and Record. However, if you want to create a drone app which is more fancy, you still have a long way to go. More advanced features should be implemented, including previewing the photo and video in the SD Card, showing the OSD data of the aircraft and so on. Hope you enjoy this tutorial, and stay tuned for our next one!