There are four types of wireless links used in DJI products:

A table detailing the type of wireless link for all aircraft products can be found in the Product Introduction.

Osmo is not included in this table and uses the WiFi wireless link between itself and mobile device.

Aspects of the wireless link that can customized include:

Before taking off, OcuSync will automatically scan the environment and choose the frequency band with the lowest interference, ensuring more stable video transmission. During a flight, it sends key flight parameters back for viewing in the SDK and supports a maximum download speed of 40Mb/s for photos and videos.

In use, this is the difference between smooth or interrupted transmission, short or long flight range, and short or long recovery times after interference or GPS signal loss. Additionally, since Wi-Fi uses a traditional protocol stack, it takes longer - from several seconds to tens of seconds – to get connected and to re-connect after signal loss But OcuSync uses Cross-Layer Protocol Design, it can establish or re-establish links within one second.

As well as point-to-point video transmission, OcuSync also supports wireless connections to multiple devices. For example, you can connect the DJI Goggles, remote controller, and Mavic wirelessly to OcuSync all at the same time. You can also add an additional remote so that you can control the Mavic with two remotes or share First Person View (FPV) videos.

Lightbridge has been developed by DJI specifically for long range, robust aerial communication in the 2.4 GHz band, and is used as the link between remote controller and aircraft. It provides significantly more range than WiFi, with up to 5 km communication in some products.

Lightbridge has 8 selectable channels. Channel selection can either be done manually, or left to the radio to determine what channel has the least interference. Data rate and channel quality can be measured to understand how channel is performing.

Some remote controllers with Lightbridge wireless links also have a secondary video port. This port can be used to send the live stream in HDMI or SDI format to an external device.

The video streams from both cameras can be combined into a single live stream with one stream inside the other in picture in picture or PIP mode. In this mode, one camera video is placed as a thumbnail in the video from the other camera. 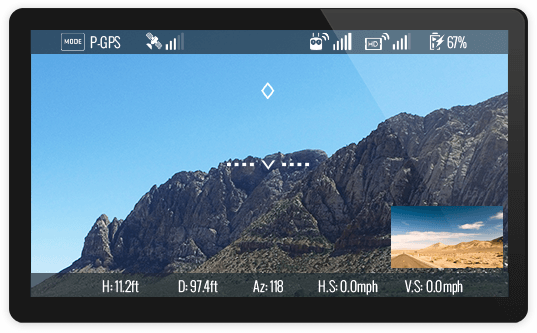 OSD is when real time aircraft state information (like altitude, attitude etc.) is overlaid on the live video stream. Using OSD can greatly simplify an FPV application as there is less need to process and display aircraft state through the application.

WiFi and Auxiliary wireless links are used simultaneously between aircraft and remote controllers. The auxiliary link is a low bandwidth, but very robust link that carries control information critical to aircraft operation only. The WiFi link is higher bandwidth but is less robust and therefore carries application information and the live video stream.